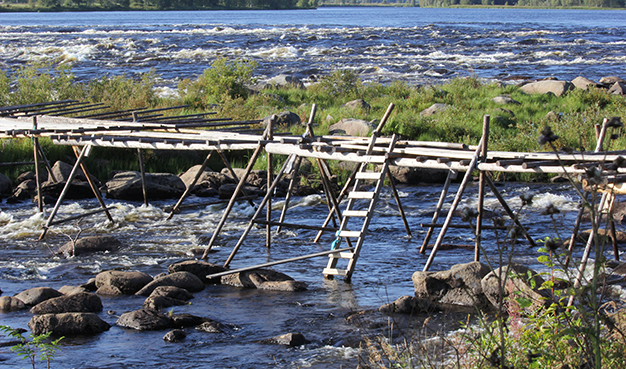 Tornionjoki river is the biggest free-flowing river in Europe in which whitefish and salmon spawn. Kukkolankoski rapids are a crown jewel of Tornionjoki. It flows unobstructed even in winter. The village of Kukkola is situated by the rapids. The village is one of the old villages dotting the riverside. The village had a number of houses already in the 16th century. Especially near Kukkolankoski rapids you can find beautiful cultural environment and nature in abundance. Many old fishing traditions have been preserved to present day in the rapids area.

The cultural environment around Kukkolankoski rapids include the buildings traditional to the area and fishing related constructions on both sides of Tornionjoki river that borders Sweden and Finland. Nowadays old fishing methods are still used in catching whitefish, lamprey and burbot. Even today, when whitefish is fished using a sort of a landing net, "lippo", the day's catch is divided among the village houses based on old agreement.

"We have been netting for over eight hundred years. His majesty's letters from the 17th and 18th centuries give us the right which we stand up for. And those letters have kept their promise. They have been as the river. They have traveled through all sorts of trial. Even the hundred years of Russian dominance was unable to revoke them. The fish of the rapids belong to us. It is the property of the first sixteen estates. In summernights we share the fish according to the original estates". Jaakko Heikkilä, Kukkola by the rapids book.